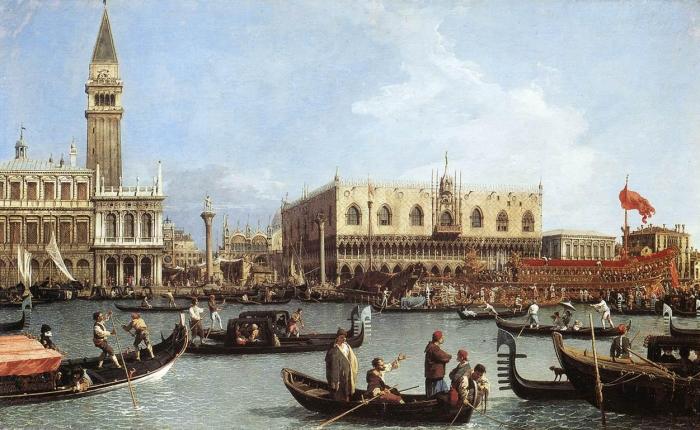 One of the great misconceptions that many people hold about the Middle Ages in Europe is that they were a time uniformly devoted to royalism and monarchy.   The typical picture is that of a king, attended by his retinue, waging war against other kings, each surrounded by servile knights willing to fight to the death for the honour and welfare of His Royal Majesty.  Such a picture, however, presents a woefully inadequate image of the rich tapestry that was medieval government.  Monarchy varied in its strength, and was sometimes even elective.  Quite often, aristocrats were masters in their domain and waged wars with each other upon their own authority.  Free cities abounded across the continent, many with decidedly un-monarchical governments.

More commonly than many realise, aristocratic republics of various types (designed so as to distinguish them from post-1789 “democratic republics” on the model of the French Revolution) existed at various points in medieval and early modern European history, at various places on the continent.  While varying in their details and traditions, these republics generally shared one thing in common – stable administration provided by a process in which the best men in their polities were brought to the fore and included in sharing power within their oligarchic systems.  These republics were not in any sense “democratic” as we now generally think of “republics” as being – they were neither communist shams like the “People’s Democratic Republic” of North Korea nor democratic shams like the United States of America and others around the world today.  Within them the franchise – the exercise of political authority – was held by the leading men and was generally restricted to those who had either proven themselves in battle or through political wisdom or who were successful in the (sometimes quite literally) cutthroat world of medieval commerce.

However, when considering the histories of these medieval and renaissance republics, it is striking that their existence follows a definite pattern.  Almost invariably, we find these republics existing among populations which fulfill two qualifications – high average national IQs and Germanic in culture and ethnicity.  The medieval and early modern republics which we can identify consist of the following:

To this list we might also add the short-lived English Republic of the 1640s and 1650s.  However, the Cromwellian state was something of an aberration, and is rightly to be dealt with separately because it was an artificial imposition resulting from regicide and did not have the legitimacy resulting from a long train of tradition behind it, even though in many ways it was a logical progression from the sort of parliamentarianism already developing in England at the time. It could have been handled better, to put it mildly.

The first thing we should note about the peoples of each of these nations is that they are, on average, high IQ populations.  I’ve linked to it before, but Richard Lynn’s paper on national wealth and national IQ provides data on the IQs of nearly every country in the world (see esp. Table 4).  From the data therein, we see the national IQs for each of these groups of people: Italy (IQ=102), the Netherlands (102), Switzerland (101), Germany (102), France (98), Swedes/Russians (101/96), Iceland (98), and the UK (100).

At this point, I’d like to make the point that I am not attempting here to say that monarchy was or is a form of government for lower IQ populations.  Indeed, many high IQ populations in Europe were also monarchies, and grew into more absolutist monarchies over time (e.g. Spain – 99, France – 98, Austria – 102, several major German states – 102, etc.).  However, monarchy was also shared with many lower IQ states as well, such as Portugal and several of the Balkan states prior to their absorption by the Ottoman Turkish monarchy, itself also a lower national IQ state.  Aristocratic republicanism was not to be found among these types of populations.

Why were many high-IQ populations prone to preferring aristocratic republicanism over monarchy?  I suspect that much of the reason has to do with the fact that a relatively larger segment of their populations would have had the high IQ (say, above 120 or so) necessary to allow them to really understand and apply the mechanisms of administration, economics, and law.  In such cases, a broader pool of talented and worthy men meant that power did not need to be concentrated into the hands of one man.  Indeed, a larger pool of such men would have meant a commensurately greater number of men who were not only ambitious, but capable of acting on their aspirations for public renown.

However, even more important than the IQ perspective, I believe, is the facts that each of these populations was Germanic in origin and ethnicity.

For clarification, I would like to take a moment to establish the “Germanic-ness” of some of the nations on the list above.  Obvious, the German city-states, the Dutch, English, Swiss, and Icelanders need no proof of their Germanic pedigrees.  Looking to the northern Italian city-states, let us remember than northern Italy was much more “Germanised” during the Völkerwanderung that ended the western Roman Empire.  Ostrogoths, Lombards, and Saxons settled more thickly in northern Italy than Germans did in other parts such as Spain or North Africa.  Even today, northern Italians look much more Germanic than do Neapolitans or Sicilians, often having blond or red hair and blue or grey eyes.  Alsace, though part of France in modern times, is a descendant of the old Frankish kingdom, and lay within the more properly Frankish, rather than Gallo-Roman, portion of the old Carolingian empire.  As for Pskov and Novgorod, though these are now Russian cities, they were originally founded or else brought heavily under the influence of Swedish Vikings (aka Varangarians) who moved into the area to establish trading posts, and who intermingled with the local Slavic populations.

What is it about the Germanic charactre of these peoples that might make them amenable to the sort of aristocratic republicanism seen among them?

First, there is the evident importance of private property ownership within Germanic communities.  The bulk of the early laws that we have evidence for among the Germanic groups deal with property – its ownership, its transfer, and its inheritance.  This is important because while private property is often thought of in particular as a bulwark of more modern capitalistic systems, we can understand that property ownership has more traditionally denoted inclusion in and involvement with the local community.  Even in modern Western cultures until very recently, property ownership (buying your first home, acquiring your own farm or store) was considered to be a sort of “graduation” into full participation and membership in the community.  Owning property gives a man a stake in the welfare of his community and society, hence, gives him a right to have a say in its governance and direction.

Second, and deriving from the first, I believe we can point to the traditional social system of freemanship within Germanic societies.  Like most others, Germanic societies were hierarchical in structure.  Indeed, the weregild system demonstrated quite a stratified sense of the worth of individuals at each level within society.  Nevertheless, in Germanic societies, as opposed to Mediterranean ones, freemen formed a larger percentage of the population.  As a result, these men – who generally consisted of farmers and other property owners, and were more prosperous than the slaves, serfs, and artisans below them – were able to wield a greater share of political power within their societies, enough so that the nobles would often have to work with them or court their support for decisions involving the community or tribe or nation.  Hence there was a more broad-based petty aristocracy in place which granted a greater legitimacy to the hierarchical system that existed.  More men existed who were more independent in mind and station, and could take part in ruling rather than simply being ruled.  We can see on the map below that with a few exceptions, there is a great deal of overlap between the individualistic regions in Europe and places where these medieval and early modern aristocratic republics existed.

Third, and in turn arising from the second, the Germanic peoples had more well-developed aristocratic institutions in which authority within their communities was shared among the leading men, but certainly not with every single person in society.  Every noble and freeman was entitled to sit in the things, the Germanic councils that made day-by-day decisions.  Likewise, many of these peoples did have kings – but the kings were elective, non-hereditary, and their power was limited by both law and traditional custom.  When the transition from tribes to medieval nations took place, it was a short step to transform the thing and gathering into a city council, and the elected king into a Doge or stadtholder.  The conceptual mechanism was already in place and was a settled part of Germanic culture, broadly defined, such that it carried through into the much more sophisticated apparatuses seen later.

Hence, we can see that aristocratic republicanism was not simply a fluke that appeared ephemerally here and there during the millennium between 700 and 1700 AD.  Instead, it was a culturally appropriate and indeed traditional form of government among many of the peoples during this time period who were descended from, and still carried with them, the Germanic culture of the peoples who flooded into the western Empire and spread all across northern Europe.  That they did this is entirely predictable, since overall cultural traits are surprisingly stable and remain with the people carrying them even if specific forms change. Further, and despite the impressions that many may have, aristocratic republicanism was a form of government which was actually quite capable of providing competent administration and stable, well-grounded government to the people fortunate enough to live under it.  Let us not forget, for example, that the Venetian Republic lasted for eleven centuries – longer than the French or Austrian monarchies – and was only overthrown when it was conquered by Napoleon in 1797.

This has ramifications for us today.  I’ve observed before that in the event of the Great Reset – the partial or complete collapse of America and the West as a result of the increasing energetically strained discord with reality that progressivism is forcing upon us – the likelihood of a genuine monarchy being established in one or more American successor states (especially of the absolutist kind preferred by some strains of neoreaction) is pretty much nil.  Instead, we should expect to see the white population fall back upon the Anglo-Germanic roots of its culture and return to the sort of aristocratic republicanism which rests on the authority of property-owning freeholders and those who rise to the top because of their personal merits from among the larger mass of the population.

24 thoughts on “Why Were Medieval and Renaissance Aristocratic Republics Limited to High IQ Germanic Populations?”