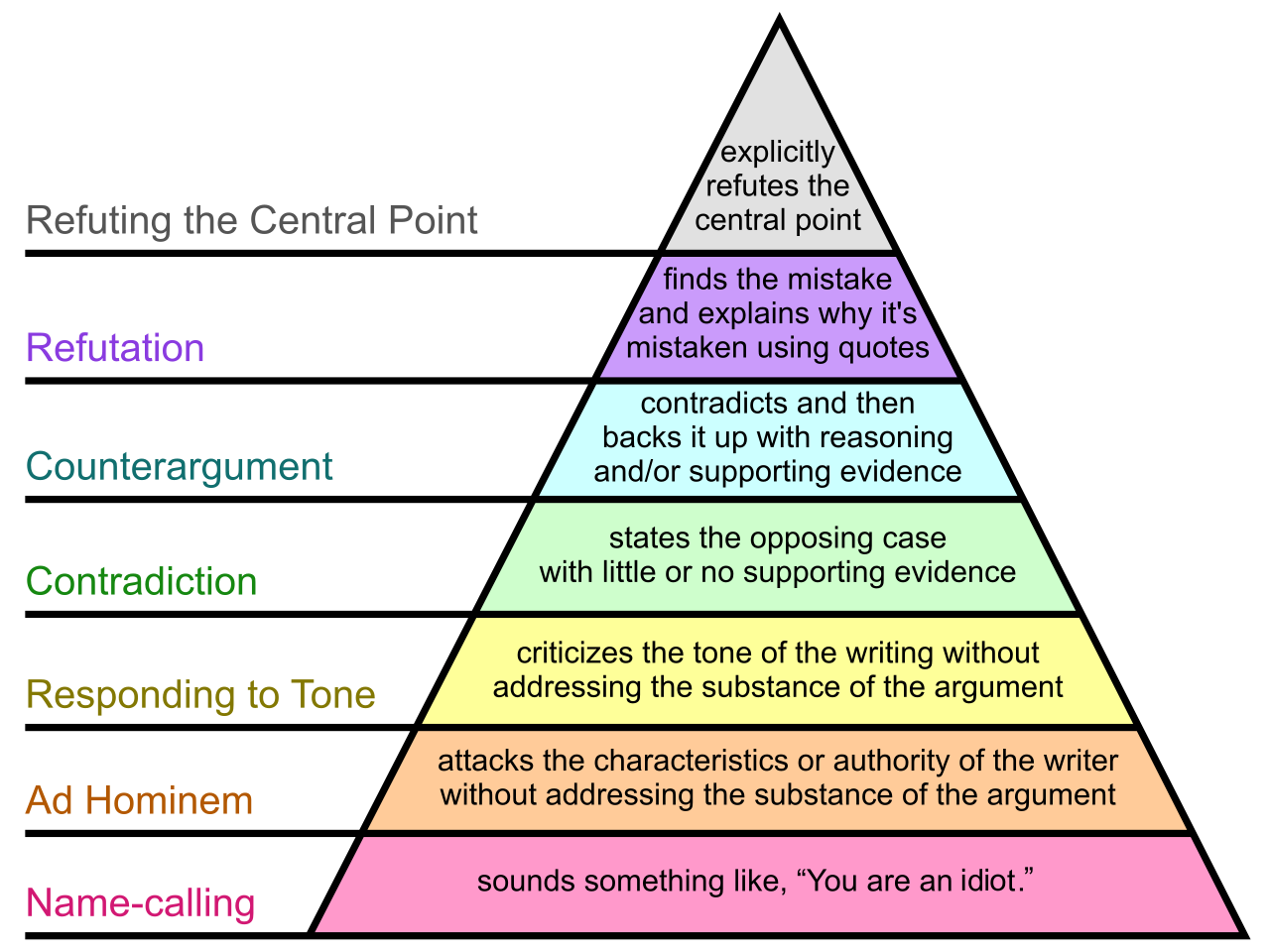 The graphic above was recently posted onto Twitter, billed as a hierarchy for argumentation that would allow us to learn how better to constructively and rationally disagree with each other so as to arrive at a common understanding.  Certainly, most all of us can agree that rational disagreement and common understanding are better than sullen or violent disagreement leading to strife at every level from the personal to the international.  This is especially the case for our modern Western nations where we see public discourse increasingly riven with a seemingly impassable gulf between two broad ideological groups.  Can’t we all just learn to get along?

It’s certainly wonderful to think that “all we need to do is find ways to constructively disagree with each other,” and think that this would solve most, if not all, of our problems.  But there’s a tremendous difficulty with applying this to the modern ideological divide between Right and Left, the “reactionary” (true or otherwise) and the progressive.  The difficulties lie in that this line of thinking implies that there are two sides which actually want rational discussion and a settling of differences rationally.  Yet, there are not.

Indeed, what the Left wants is precisely the opposite of this.  The progressive Left has not, does not, and never will seek some sort of accommodation with its ideological enemies.  Instead, the Left seeks to acquire for itself the institutional and social power to silence its enemies.  Ultimately, this proclivity stems from the very nature of what drives the “progressive idea,” which is that the “arc of history” is always bending towards the advancement of what the Left believes is “progress.” Since this trend is inexorable, there is no need, ultimately, to compromise with the Right, merely find various ways to outlast them and hasten their demise.  This sort of thinking is responsible for everything from doxxing to the gulags and explains why progressivism is the single greatest evil that this world has ever seen.

At the risk of sounding like a progressive myself, one of the overarching problems with the modern world – which includes the worldview of the “classically liberal, libertarian” soft centre – is that it still holds onto essentially bourgeois attitudes about social and civic participation.  These attitudes include notions of fair play, the “marketplace of ideas,” approaching consensus through reasonable discussion and the free and open exchange of ideas, and so forth.  To the average American and Westerner, these all sound like pretty straightforward goals.

But they are not goals which the progressive Left shares.  Indeed, the Left has absolutely no desire to see a “free and open exchange of ideas” because when that happens, they lose.  When stacked against virtually any alternative, progressivism has a horrible track record, and deep down inside they know this.  This is why they spend so much effort using institutional power to suppressed dissenters from their orthodoxy.  It’s why when they do appear to be engaging with ideological competitors, it nearly always takes the form of screaming about “fascism,” “racism,” or some other slur designed to signal to their fellows the presence of an enemy, much like the moaning of a brain-dead zombie in a horror movie.

From the progressive Left/SJW perspective, there is literally NO advantage to actually having open and honest dialogue with those on the Right about any topic, and especially not with the genuine-but-currently-dissident Right.  They know that when they engage us in the “marketplace of ideas,” they lose.  All that can happen for them is to see defections from their ranks and to lose their grip on institutional power.  So why would they ever accede to an open exchange build about “rules of fairness,” if they don’t have to?

The short answer is, “they won’t.” So why would we ever expect them to?

While I’m sure most readers have already noticed this, people on the Left are generally not very smart when it comes to metrics like “being able to think logically” or “having a broad, well-rounded knowledge base.”

People on the Left – at least the “boss lefties,” not necessarily the random unwashed antifa street drek they use as muscle – are smart when it comes to things like intuiting and using power structures and manipulating public opinion.  That’s why well-meaning but ultimately clueless boomer Tea Party types keep getting rolled by them, every time.

What I’m talking about is akin to Vox Day’s dichotomy between dialectic and rhetoric,

“Dialectic is based on the construction of syllogisms, so it’s very obvious when one is lying. Rhetoric is ‘the faculty of observing in any given case the available means of persuasion.’”

Dialectic is the building of formal arguments to arrive at truth rationally. It’s what the graphic at the top of this thread is essentially encouraging. It also happens to be exactly what the Left doesn’t want people doing.

Rhetoric, on the other hand, is the art of persuasion by appealing to “other things” like emotions, shame, fear, ridicule, or whatever else. In social media terms, it’s what everything from memeing to the threat of internet mobs and doxxing are built upon. This is what the Left has mastered the use of (despite being unable to meme), and which the Dissident Right has not. This is mostly because the Dissident Right fails to organise itself for concerted action, thus failing to produce any credible “rhetoric alternative” that can consistently be used to counteract leftist rhetoric.  As occasionally useful as the hornet’s nest of the chans may be, they nevertheless don’t present a dependable threat to the Left’s hold on rhetoric and its abuses.

What the Dissident Right should understand, though, is that none of this is really the fault of Twitter and other social media outlets.  Yes, leftist efforts at suppression and deplatforming are credible threats to the dissemination of Rightist ideas.  However, too many of the attempts to get around these efforts (such as loudly proclaiming where and when you’re going to build your “alternative to YouTube, ” etc.) seem to me to be purposefully unimaginative battering of our heads against a brick wall.

We could easily be using social media in an “underground” fashion and avoid a lot of the bans and other suppression efforts if we really wanted to.  We could direct action against bad actors if we were simply smart about it.  We could make lefties fear in real life, if we would take some simple steps in playing it smart and organising in a digitally subterranean way.  As it stands, the Right seems to telegraph every punch it tries to throw.  But as any smuggler knows, the best way to not get pinched is to not give The Man a reason to suspect you in the first place.

The simple fact of the matter is that the Left holds nearly all real institutional power.  But what many people on our side don’t realise is how fragile this hold really is.  However, the Left does.  That is why they work so assiduously to suppress the genuine Right.

Keep in mind, however, that suppression is the tool of those who are unsure of their grip on power.  The king who enjoys a secure position and the love of his people knows that he can allow a certain amount of dissent.  The one who fears overthrow must take ever greater measures to try to prevent it.  Unless there truly is a credible and legitimate threat that has immediately presented itself, proscription and suppression betray a lack of confidence on the part of those holding power.

This is why our side needs to capitalise on every tool of rhetoric available to use against the Left.  There are literally no limits to its use, and rhetoric is tremendously difficult to effectively parry.  The same cannot be said for the type of dialectic which conservatives and libertarians tend to try to use.  Progressives will scrupulously shut down any attempt to engage them with dialectic argumentation.  This is easy for them to do since dialectic implies the centralisation of interaction.  It suggests the singularising of debate to one point in spacetime between two or more debaters.  The Left is never going to play by this sort of conservatard “Robert’s Rules of Order” type of debating style.  Progressives will find that easy to shut down, however.

Hence, why our side needs to get better at using rhetoric beyond merely posting Apu memes on social media.  Consistently subjecting progressives to targeted ridicule from all sides will prove much more difficult for them to refute.  The Left will have more trouble dealing with emotional appeals tailored to engage the concerns of normies, since these can be made in a decentralised, one-on-one fashion.  And yes, part of using rhetoric against the Left involves generating the credible threat that doxxing, internet mobbing, etc. could be used if necessary.  It’s not that we shouldn’t do these, but that we should be smarter about it.

Those in the Dissident Right need to understand (if they don’t already) that we’re at an asymmetrical disadvantage.  Trying to employ the same public civil tactics (demonstrations, activism, etc.) that progressives are able to employ are not likely to be successful. This does not mean that “passivism” must entail being a bunch of layabouts.  History is replete with dissident groups who were at asymmetric disadvantages and yet who went on to victory in their struggles.

What it does mean is that the Dissident Right needs to get serious about developing strategies which may be used outside of and against institutional power which are appropriate for the stage which you are at.  What I’m essentially describing is the use of Fourth Generation Warfare (4GW), something which elements within the broader Dissident Right have had a poor track record at applying.  Using 4GW affects every level of a conflict (and make no mistake, we are essentially in an undeclared civil war with the progressive Left right now, even if normie conservatism is unable to recognise it).  These levels include everything from information dissemination to sabotage to open warfare.

Knowing which are appropriate for where you’re at is the key to success.  As the old saying goes, if you’re mad and you step out onto your porch with your shotgun but don’t see all your neighbours doing the same, then it’s time to just go back inside.  The Dissident Right needs to understand the times, recognise what level of conflict prosecution is fit (and possible) for our current stage, and get serious about then prosecuting said conflict.

It’s often said that “we’re not going to vote our way out of this.”  That’s true.  Likewise, we’re not going to talk our way out of it, either.  We’re not going to be able to convince the progressive Left to give up its institutional power merely because we ask them to play nicely.  Though we’re used to thinking of lefties as soyboy sissies, it is nevertheless true that (at an institutional level) they play for keeps and will use whatever power they have to to obtain their ultimate goals.  The Dissident Right needs to accept that to be willing to pursue a goal is to be willing to pursue the means necessary to achieve that goal.  Once this psychological fact is acknowledged, we will begin to be much more effective in opposing the imposition of the progressive agenda.  We could see the end of much of the anarchotyranny that the Left employs on a daily basis.  Most important, we could eventually see a genuine return to more traditional forms of government and society which modernism believes itself to have done away with.