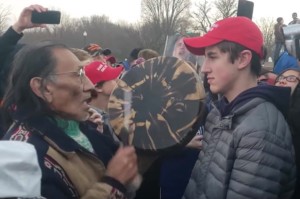 Many readers have probably observed something odd (but not entirely unexpected) about two recent high profile cases where the Left tried to game the narrative, it blew up in their faces, and there now seems to be the possibility that the bad actors in question might possibly face real consequences for their actions. These are the Jussie Smollett fake hate crime and the Covington kids fake racism hoaxes. In the one, Smollett is now facing felony charges (including, possibly, federal charges). In the other, several of those who libeled the Covington Kids, such as Nathan Phillips and the Washington Post, face hefty lawsuits.

One thing many have probably noticed, as well, is how absolutely freaked out many progressives have been because of this. It seems odd to us that they would be disturbed by people receiving the just reward for their bad behaviour. This is because we on the broad Right naturally tend to assume that if someone does something bad, they’ll eventually have to face the music. That’s the way the Right’s sense of justice assumes it should work.

Yet, anyone who pays attention knows that this is nearly always NOT how it works. How many left-wing hate crime hoaxes have gone unpunished? How many times have lefties gotten to destroy someone’s life or reputation with no repercussions? The Left is allowed to behave horribly with basically no accountability.  Why is this?

It boils down to social status. In this context, we’re not really talking so much about “the esteem of one’s peers” or similar phenomena.  Exemplary personal qualities or contributions to society are not in view here.  Rather, social status, as it applies to the Left, is something which is conferred onto you from above by opinion-makers and -shapers, usually because it fits some sociopolitical goal.  High social status is obtained by belonging to one of the correct intersectionality pressure groups who can be leveraged to bullycide society into accepting otherwise unwanted social changes.

Status is, in turn, the key to being able to exercise power, either directly or through power-wielding benefactors who sponsor you.  For the Left, everything is about obtaining and using power. This is why the Left tries to exploit the “breakable” features of democracy (a political system that is supposedly more amenable to personal freedom) to extend control over every area of life, both public and private.  Even its attempts to use humour to transmit ideas (i.e. meming) seem foreign and odd because the Left memes to power, rather than to express truth.

Hence, the disparity in outcomes for bad behaviour works the way it does because in our clown world system, lying American Indian activists and gay Jewish black dudes have high status, while you and I do not. As a result, when we do something, the law will come down like a ton of bricks. If they do something, they don’t face any trouble for it. This is textbook anarchotyranny. Even when those on our side don’t actually do anything wrong or illegal, they will still be socially prosecuted for saying the wrong thing or simply representing the wrong set of sociopolitical identifiers.

Under this system, it is perfectly acceptable for high status people to do things to low status people, but not the other way around. It’s fine (and indeed encouraged) to be a PoC activist and get up in some kid’s face, hoping he’ll smack you like you deserve, providing you with a video recorded excuse to flex your high status on a bunch of MAGA white guys. Likewise, it’s alright to fake a hate crime against yourself when the only likely result would be hundreds of Trump supporters being assaulted by your fans looking for revenge.

This, much more than simple baseline left-wing hypocrisy, is what explains why progressives are so ticked off that genuine justice may be served in both cases. See, when you’re high status, your targets are just supposed to shut up and take it. They’re definitely not supposed to launch multi-million dollar lawsuits against you. The police aren’t supposed to arrest high status people for things involving political correctness conflicts, and if they do, someone from headquarters is supposed to phone down and set the offending officers straight on the matter.

So what’s happening in both cases is quite unusual, from the perspective of progressives and other lefties. It’s unnatural what they see happening. And it’s also quite disturbing to them on an existential level. Both cases represent threats to the high-status position of left-wingers.

Granted, even if Phillips and the Washington Post end up broke and Smollett goes to jail, it won’t decisively overthrow the status structure currently in place, but it would show that the Left can bleed. And they don’t want sharks smelling that in the water.

Once someone successfully sues an activist and wins, it opens the floodgates. Other victims will come forward, other lawyers will realise that opportunity lies there, and will take it. This precedent is already being set by the Centre for Immigration Studies, which is suing the SPLC under RICO statutes for falsely labeling it a “hate group.”

Likewise, if Smollett actually goes to jail, it sets a couple of precedents. First, there is that of demonstrable proof that hate crimes are being hoaxed (it no longer remains a “right wing conspiracy theory”).  Also, there is a precedent set to the police themselves that high status intersectional activist types – who despise all those working class white guy cops anywise – can be brought down.

In short, these would involve a reduction in status for left-wingers. Maybe not a lot at first, but it would begin a process that could snowball on them. Which is why the Left will do whatever it takes to nip this in the bud.

Expect to see more, and more vicious, threats against the Covington kids in coming weeks. We should anticipate that the lefties will attempt violence to intimidate them away from their lawsuits. Likewise, expect the Left to pull whatever strings it has to to get Smollett the “right” judge presiding over his case. They’ll do whatever it takes to get him off, or at least get some trivial slap on the wrist like community service that he can discharge by touring local schools and lecturing them about opposing the “hate” being caused by Trump and his supporters.

It’s all about who is high and low status. Unlike economic growth, status really is a zero sum game – if you lose it, someone else is gaining it. Being viewed as high status is what makes the progressive agenda work. It’s the only way they can push off such obvious nonsense as they do onto the masses of people who disagree with it but are bullied into compliance. Literally, if the Left loses high status, it loses all its gains. For them, these cases really are life and death.

The obvious way to combat the Left’s agenda at a culture war level is to first undermine their social status as it currently exists.  Simply holding Tea Party marches or slapping Identity Evropa stickers all over town will do nothing when these will simply be identified as low status and dismissed.  Direct activism only works when you already have support among at least part of the elite – which is currently not the case for the Right in America when they can’t even get their own ostensible political party to back them up.  Marches and rallies are expressions of social power, not means for getting it.

So how do we undermine the Left’s social status?  As noted above, some unique circumstances have shown the way, at least partly.  Simply being willing to stand up to the Left – to hit back with lawsuits, to prosecute even when it’s unpopular – serves to remove the aura of invincibility, and thus superiority, which the Left tries to cultivate.  Demonstrating, even in little ways, the falsity of the “inevitable march of progress” creates cracks in the dam.

Ultimately, though, it requires the Right, through both official and unofficial channels, to go after and inflict punishments upon leftist institutions – and make those punishments stick. Defunding Planned Parenthood via Title X administrative changes is a good recent example, if it can be made to stick.  While Trump hasn’t been very good at getting his wall built, he has done a good job of using the federal bureaucratic system to undermine the Left in its institutions. Defunding the Left and removing its access to official funding and support removes a lot of status in and of itself.

Going after and discrediting Big Journalism, Big Academy, Hollywood, the judiciary, and other Left institutions is vital.  Not so much in the sense of bringing them down in the eyes of millions of already low status Heritage Americans, but in using what power in government the Right has (primarily at the state level, for now) to keep sapping at them until they fall apart.  The war we face is, for now, cultural in form and must be fought on that battlefield.

However, we should not completely discount the value of encouraging and working towards a more consolidated response against these institutions by Heritage Americans.  We still make up the majority (for now) and still represent the single largest aggregated block of wealth holding in the country.  If white Americans really did get serious about acting as an economic bloc, “get woke go broke” would become a widespread reality.  Remember that part of power is money, and directing its expenditure toward and away from certain things enables the exercise of power, even if merely in a negative and destructive sense.

This will involve the spreading of the meme at the demotic level, from friend to friend, family member to family member, co-worker to co-worker (though be smart about it and don’t get yourself fired!).  Further, don’t try to reach “soft left” or undecided acquaintances with reasoned and logical argument.  Not because we don’t have these, but because people on the Left are driven more by emotion than reason, so trying to use intricate, well-reasoned arguments is the wrong approach to take with them.

Instead, turn their own weapons against the Left. When prominent left-wing figures are brought up, don’t point out why these people are making wrong policy decisions, just scoff or roll your eyes and display disdain. Use snark against the Left.  Turn the emotions, the lizard brain, of these folks against the Left by consistently applying peer pressure in that direction. Coordinate with other known Rightists to support and substantiate each other in these efforts.

To defeat an enemy, you have to understand them.  The Left are not so much Harvard debating club as they are Instagram favourites page – deal with them accordingly. If there is a widespread feeling that the Left is losing status at a demotic level, this will serve to counterbalance official attempts to grant leftist positions and groups high status.  At every level, from the lowest to the highest, we have to be ready and willing to play the long game if we really mean to win.

3 thoughts on “Social Status and the Left’s Power Politics”


Christian Interest
Meditate in Thy Precepts
What is Truth?
Jackhammer (archival)
You Think Too Much
Faith Saves
Bindlestiff